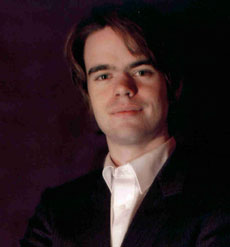 I have laid myself excellent foundations for a most exciting and fruitful time in the... years to come

‘Spectacular’, ‘exquisite’ and ‘breathtaking’ are words used to describe Christopher’s prodigious talent as a pianist.  Born in Morayshire, of Scottish/Northumbrian descent, he has been hailed as one of Scotland’s most promising young musical talents.

Christopher started his musical education aged seven and entered St Mary’s Music School in Edinburgh six years later.  Christopher’s former teacher at the school is in no doubt that he is an outstanding musician and pianist with unlimited potential.  Amongst his many achievements in piano performance are as Gold Medallist in the Chopin Society of Edinburgh’s competition class at the 2001 Perform Festival, and outright winner of the Moray Piano Competition in the same year, in which he was, and still is, the youngest ever winner.  At the St Mary’s Music School Director’s Recital Prize final, he was outright winner for his performance of Kenneth Leightons’ Five Studies for Piano.

More recently, Christopher performed at the Malcolm Arnold festival in Northampton where he gave the World Premier of Arnold’s Flamenco for solo piano.

Christopher was offered scholarships to all the major conservatoires, but chose the Royal College of Music, London where he is a Foundation Scholar of the piano, studying with the renowned pianist, Andrew Ball.

In his first year, Christopher won the Frankck Merrick Prize for the Best Performance of a Work by a Significant British Composer, adjudicated by Rolf Hind, at the College’s 20th Century Piano Competition.

Christopher received a Dewar Arts Award to support his studies at the Royal College of Music in London for four years.

After four intensive years of study at the Royal College of Music, Christopher graduated in 2009 with an outstanding first class honours. Included in the repertoire of his Final Recital was Elliott Carter’s Piano Sonata which Christopher now refers to as his ‘trademark’ piece. He will remain at the College for a further year to complete a Master of Music degree.

Christopher writes, “Thank you for all your generous support over the last few years.  It has not gone unappreciated as, without your help, what I have done and the great things I have achieved would have been impossible.”

I have laid myself excellent foundations for a most exciting and fruitful time in the... years to come