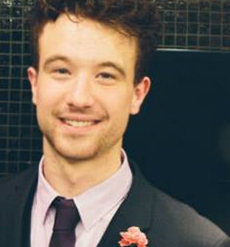 "To be selected was incredibly humbling, and not only validated what I had already achieved, but drove me to apply 110% of myself to my writing."

Adam’s passion for writing started from a very young age, when he would scribble random symbols and letters on scrap pieces of paper and then present his parents with his ‘stories’, insisting that they read them back to him. This love of storytelling quickly developed into a love of reading, as he devoured books and excelled at English in school.

Adam was accepted onto a course in English Literature at the University of Glasgow, but found this didn’t quite satiate his desire to tell stories as well as read them. He began instead to invest increasing amounts of time in one of his option courses, Film and Television. He switched to study this full time, and graduated with an MA (Hons) in Film and TV in 2015.

After graduation, Adam was determined to tell his stories through the screen. He applied and was fortunate enough to be accepted onto an intense, one year Screenwriting Conservatory program at the illustrious New York Film Academy, at the Manhattan Campus. There he wrote several pieces for both big and small screens, and also managed to sell a screenplay for production in Bermuda.

This was an excellent opportunity to learn and network at the hearts of the industry, but Adam has never lost sight of his Scottish roots. His ambition is to draw inspiration from his upbringing, and create stories weaved around his home country.

Despite working two jobs and hosting several fundraising events in the year between leaving University and starting at the Film Academy, Adam was unable to fully cover the cost of studying New York. Adam’s Award helped him to make up the shortfall, allowing him to fully focus on developing his skills on the course, and enabling him to make the most of this rare opportunity.

"To be selected was incredibly humbling, and not only validated what I had already achieved, but drove me to apply 110% of myself to my writing."