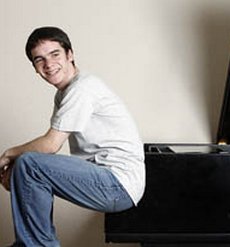 I believe it is really important to develop my own “voice” both compositionally and as a performer, and I would also love to be a voice for Scottish jazz on the international scene.

To have a life in music has been Alan’s dream since he was eight years old. A graduate of St Mary’s Music School, Alan started his musical career by learning the violin and was a member of the National Children’s Orchestra of Scotland. He represented the City of Edinburgh by playing solo violin in the UK Holocaust Memorial concert.

Then he discovered jazz. He switched to playing the piano, set up a jazz quartet (Take 4) at school, with whom he has performed throughout Scotland and helped to launch a BBC youth initiative. Take 4received the School’s Director of Music’s discretionary Award for Musical Achievement.
Up until then, Alan was largely self-taught on the jazz piano. He then had the benefit of tuition from a number of leading pianists/composers who helped him develop and refine his technique and composing. A self-confessed obsessive jazz pianist by this time, Alan took every opportunity to play – with Tommy Smith’s Youth Jazz Orchestra, the National Youth Jazz Orchestra and his own jazz quintet. He also was a regular performer in Edinburgh’s Jazz Bar, which led to great opportunities to play gigs with the best jazz musicians around.

Being offered a scholarship to study jazz piano at Berklee was a dream come true. By this time, Alan was being noticed as a jazz pianist of huge potential and, unsurprisingly, he won the BBC Scotland Young Jazz Musician of the Year at the same time as being accepted by Berklee.

On arrival at Berklee Alan made history by being awarded the highest ‘rating’ of any Scot entering Berklee for more than 20 years.

As well as allowing him to be in some of Berklee’s top student ensembles, this also gave him the opportunity to study with Berklee’s premier piano teacher, JoAnne Brackeen. He writes,”I had been hoping that it might be possible to study with her later on in my studies if things went really well, so I’m over the moon to have it happen from the start.”

The Dewar Arts Awards is supporting Alan’s studies at Berklee.

Alan spent four remarkable years at Berklee, getting straight ‘A’s’ for his studies, winning the 2009 Alex Ulanowski Award for outstanding composition, taking over the piano chair of the Berklee Rainbow All Stars ensemble and culminating in receiving the 2010-11 Billboard Award.

Alan writes of his whole Berklee experience that “I’ve been able to get a taste of what it’s like to play with some of the best musicians out there….and thereby learn some important lessons that no classroom can give you.”

July 2015 – Alan and his trio released the acclaimed debut album ‘Traveler’s Tales’, inspired by Alan’s travels as a musician, the landscape of Scotland and his love of Japanese animation.

I believe it is really important to develop my own “voice” both compositionally and as a performer, and I would also love to be a voice for Scottish jazz on the international scene.