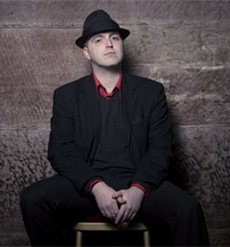 Thanks very much, I’m delighted… and am already looking forward to being able to embark on my project with support from the Award.

Freelance stage writer/director/translator Alan McKendrick, from Glasgow, already has a number of stage successes under his belt. His most recent stage work as writer/director includes The James Dean Death Scene, Finished With Engines and The Bad Drive Well. In 2006 he was winner of the Arches Award for stage directors (for The James Dean Death Scene) and the following year reached the final shortlist for the prestigious Meyer-Whitworth Award for the UK-wide best play by a new writer (for Finished With Engines).

The Dewar Arts Award helped Alan to spend a period of time on a creative attachment with the renowned Schaubuehne Theater, Berlin.

Having spent a period of time in Berlin, Alan writes that his “original intention was to…consolidate upon my already-extant skills as a playwright, director and translator. I believe that …this was ultimately achieved on a personal level.” The fruit of this time in Berlin began to appear some months after his return to Scotland, which includes the possibility of his own work being translated into German and him working with a German director on a German-English stage translation.

Thanks very much, I’m delighted… and am already looking forward to being able to embark on my project with support from the Award.