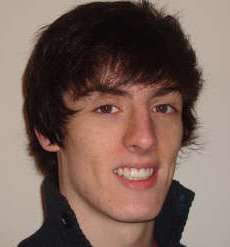 This offer will help me and my family tremendously. I can’t thank you enough.

Andrew began to study ballet at the age of eight and quickly showed a natural physical aptitude. He joined the Scottish Ballet Junior Associates programme and later auditioned successfully for the Dance School of Scotland, where he studied for four years. He won class prize twice and featured in the School’s annual showcases at the King’s Theatre and Theatre Royal, Glasgow.

During his time at the Dance School, Andrew showed himself to be a committed, focused and hard-working student. He gained distinctions in the Royal Academy of Dance examinations for ballet, modern and tap dancing. His teachers saw in him a musicality and expressive range beyond his years, which have developed as he has matured. Andrew also shows a natural instinct and sensitive rapport for working with a partner, which is crucial for a male dancer.

Andrew has won a place at the prestigious Elmhurst School of Dance in association with Birmingham Royal Ballet, to study for the 3-year National Diploma in Dance. He has received a Dance and Drama Award, awards which are given to only the most talented students at audition.

The Dewar Arts Award will go towards Andrew’s tuition and living costs while at Elmhurst.

Andrew successfully graduated in 2010 with the National Diploma in Professional Dance / Classical Ballet level 6 from Elmhurst School of Dance. During his final year he toured with the Birmingham Royal Ballet’s production of ‘Cyrano’ during his first term and was invited back later in the year to tour in ‘Swan Lake’  to the USA and in ‘Slaughter on Tenth Avenue’  to the S-W of England. In the School’s graduation performance of the third Act of ‘Coppelia’, Andrew was cast as Franz, the male lead. After graduation and auditioning for several ballet companies, Andrew was thrilled to be offered a post with the prestigious Zurich Ballet.

This offer will help me and my family tremendously. I can’t thank you enough.