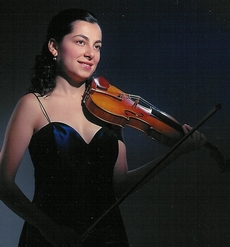 I am extremely thankful to you, and appreciate your support very much. I would like to thank you and express my deepest gratitude.

Even before Armenian-born Ani Batikian started her Masters at the RSAMD, Glasgow, in 2006 she was invited to be guest leader of their Symphony Orchestra, to play with the Hebrides Ensemble and to take two master classes with Ilya Gringoltz.

Ani began her musical studies at the age of 15 at the Yerevan State Conservatoire in Armenia, the youngest student ever to study there and supported by a local scholarship. Receiving the Raffi Manoukian full scholarship meant she could continue her studies at the Royal Academy of Music in London, graduating with a DipRAM for outstanding performance and a PGDip with distinction. When she applied to pursue a Masters at the RSAMD, she was awarded the prestigious International Full Scholarship for being an outstanding MMus student. She now studies with Peter Lissauer.

Ani has performed as a soloist throughout Armenia and Europe. She has performed with some of the major European musicians and received masterclasses with world-class musicians.

Since her arrival at the RSAMD, Ani has underlined her reputation as a musician of exceptional talent by winning the Hilda Bailey Prize, the Governor’s Prize for Chamber Music and the Mabel Glover String Quartet Prize. Shortly after her arrival, Ani formed the Cosmopolitan String Quartet, which she leads, and which has performed throughout Scotland and in London. These positive initial experiences in Glasgow have helped Ani to decide to make Scotland her home, believing that she can establish herself here as a soloist.

Amazingly, Ani has achieved all of this without ever owning her own violin. Throughout her studies she has been able to borrow excellent instruments at each institution, but she has had to give them back at the end of her studies.

The Dewar Arts Award will contribute towards a professional standard violin to match Ani’s prodigious talent.

When looking for the right violin, Ani was advised that when she played a violin that she didn’t want to give back, she would know that she had found the right one. Ani chose a Ciciliati violin and has since played it at numerous concerts.

For more information about Ani, her future concerts, and to listen to some of her recordings, see www.anibatikian.com.

I am extremely thankful to you, and appreciate your support very much. I would like to thank you and express my deepest gratitude.