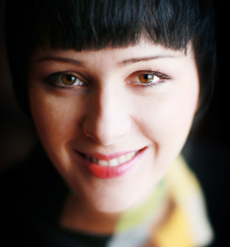 It is a wonderful opportunity for me to study at the NFTS where I can improve my skills and develop [a] personal voice and style in film-making.

Polish-born Ania became passionate about film through her initial studies in journalism. Her early fascination with ordinary people’s lives grew into a desire to tell more in-depth human interest stories through the medium of film documentary.

Ania’s first contact with the film-set was behind the scenes as an independent photographer working on, amongst others, the set of ‘Rebus’. She moved into theatre and got involved with the Citizens Community Theatre in Glasgow.

Whilst in Glasgow, Ania made the well-received documentary ‘Shooting Horses’ chronicling the story of a community performance project based on the film “They Shoot Horses, Don’t They?”. This was selected for submission to the Golden Gate Film Festival in San Francisco. She later made ‘Blackout’, a documentary about Glasgow teenagers who performed at the National Theatre in London.

Ania worked as a film-maker for a number of Scottish charities, often for no fee, to help them raise their profile and funds. ‘Passionate’ is a word often used in connection with Ania, and in her work she manages to find engaging and honest stories that touch the hearts of her audience.

Ania won a place at the highly-competitive NFTS, Beaconsfield to study for a Master in Documentary Directing.

The Dewar Arts Award will help towards the substantial costs for Ania to take up a place.

Ania has continued to build on her success and skills as a film-maker. She received the Christie Award for out-standing contribution to the NFTS and her film ‘Dylan’ has been screened at numerous international film festivals. ‘Dylan’ won 2nd prize at San Sebastian International Film Festival and was shortlisted for Grierson Awards for best student film. Ania continues to work on documentaries for British TV, including ‘Britain in a Day’ for BBC2.

It is a wonderful opportunity for me to study at the NFTS where I can improve my skills and develop [a] personal voice and style in film-making.