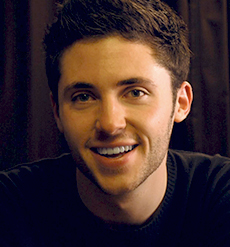 Please extend my thanks to the trustees for this Dewar Arts Award. I am honoured to be a recipient.

Edinburgh-born and bred Blair studied composition from an early age, first with Kenneth Dempster and later with Eddie McGuire. It has been an ambition of Blair’s to write music for film since a young age, when he took an intensive short course in film scoring with two times Emmy award winning composer, Hummie Mann.

He studied music at Durham University before going on to pursue an MA in Composition of Music for Film and TV at Bristol University. Blair studied conducting under RSNO Associate Conductor, James Lowe, and has conducted various ensembles over the years, including the Durham University Hill Orchestra.

Blair is the co-founder of the Durham Opera Ensemble and currently Composer In Residence with the experimental theatre company, Captain Theatre. June 2007 saw the world premiere of his opera Hamlet Versus Lear, which premiered at OpFest and he has recently finished a commission for Channel 4.  He has been commissioned to write the theatre score for Jay Parini’s new play Mary Postgate, which will be premiered at the 2008 Edinburgh Fringe Festival.

The Dewar Arts Award will help support Blair through his postgraduate studies at Bristol University.

Blair writes that his year at Bristol “was invaluable in allowing me to progress as a composer and taught me many specific skills in how best to synchronise my music to film.” Alongside studying composing for film, Blair conducted the student orchestra, Bristol Symphonia, set up the Bristol Film Orchestra and directed a short fiction film which was subsequently shown at a number of film festivals. Blair was awarded an MA with Distinction as well as receiving a number of other accolades, including winning the Exposures Film Festival National Composing Competition and receiving a 4Talent Nomination.

Since leaving Bristol Blair has gone on to compose for over a hundred projects for film, television and theatre. Included in those are Stephen Fry reading The Happy Prince for Sky Arts, the feature film Frequencies, episodes of BBC’s flagship science documentary Horizon, and a new ballet for The English National Ballet. As a musical arranger he has found himself working on high profile projects such Doctor Who and David’ Attenborough’s Life Story. In 2012 he was nominated for a BAFTA New Talent Award and also a Creative Scotland Award for ‘ Best New Talent in the Scottish Arts’.

For Blair’s portfolio of compositions and other work, see www.blairmowat.co.uk.

Please extend my thanks to the trustees for this Dewar Arts Award. I am honoured to be a recipient.