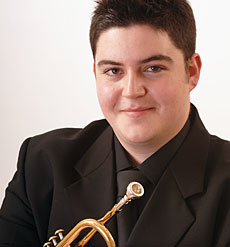 When he started playing trumpet at the age of 10, Brian aspired to become a top orchestral player. Even as an undergraduate, his considerable talents were recognised by many of the major orchestras, both within and outside Scotland, for whom he has played regularly.

Brian, from Yoker, is a keen chamber musician and has performed with the Hebrides Ensemble, the brass ensembles of the BBC SSO and Scottish Opera as well as with his award-winning brass quintet, Thistle Brass, with whom he has performed in venues as far apart as the Great Wall of China to the G8 Summit in Gleneagles.  For further information see www.thistlebrass.com.

In addition to performing solo recitals on modern instruments, Brian has a keen interest in early music and recently performed solo trumpet inBach’s B Minor Mass on baroque trumpet with the Dunedin Consort.

Currently studying for a Masters at RSAMD, Brian has a strong interest in modern music and premiered a new piece for solo trumpet by James MacMillan in 2005, to great acclaim. It is considered that, as his career progresses, he will become a vehicle for and a great exponent of the best of contemporary Scottish music. He is a recipient of the British Reserve Prize for Early Music, the Peter Morrison Prize for Brass and was recently awarded the prestigious Governors Recital Prize for Brass at the RSAMD.  He has received awards from the Countess of Munster Musical Trust and the Musician’s Benevolent Fund Education Awards.

The Dewar Arts Award enabled Brian to buy a pair of rotary trumpets, as well as support a series of lessons with some of the top European trumpeters of his choice.