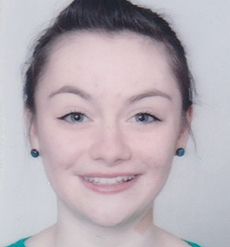 "The RCS avails fantastic opportunity for me to challenge myself in the unfamiliar. Without the Dewar Arts Award, I wouldn’t be able to fully embrace the time needed to execute these opportunities. Thank you very much!"

Hailing from rural Caithness, Caitlin enjoyed success in performance and competition from an early age.  This included verse speaking, song, instrumental work, acting and dance.  However, Caitlin found there was limited opportunity for musical theatre performance in the area.  It was the enjoyment and acclaim she gained from a single performance role at school – Scaramouche in ‘We Will Rock You’ – that inspired her to follow a musical theatre career.

Caitlin set about preparing for musical theatre auditions, dedicated herself to improving her performance skills to a level suitable for higher education. She describes how this ‘took great commitment and ingenuity, pooling together skills learned from individual tutors in the 4 disciplines of musical theatre whilst also studying for SQA exams’.

Alongside this preparation, Caitlin also gained ABRSM grades, self-studied for Higher Music, travelled a 180-mile round trip to Inverness for Higher Drama and Classical Singing tuition, and a 540 mile round trip to Glasgow for RCS Transitions courses. This commitment paid off, as she gained a place on the HNC Musical Theatre course at New College Lanarkshire, Motherwell.  Her continued tuition and development of skills culminated in gaining a place on the Royal Conservatoire of Scotland’s BA Musical Theatre course.

Caitlin’s ambition is to perform at the highest level – in the West End, throughout the UK, and internationally. She has a strong background in Scottish traditional music, which she would love to bring to her work.  Eventually, she would like to create her own work and teach any combination of the disciplines of musical theatre.

Caitlin’s Award supported her BA studies in Musical Theatre at the Royal Conservatoire of Scotland.

"The RCS avails fantastic opportunity for me to challenge myself in the unfamiliar. Without the Dewar Arts Award, I wouldn’t be able to fully embrace the time needed to execute these opportunities. Thank you very much!"