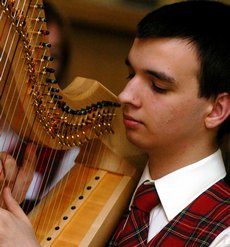 Having a quality instrument at this stage of my musical development has given me tremendous confidence in my performance.

Calum is a pupil at the City of Edinburgh Music School, based at Broughton High School. Already an accomplished all-round musician, Calum plays clàrsach, as his main instrument, as well as piano and recorder. He plays in many school and local region ensembles and is a member of his school choir and the Lothian Gaelic Choir.

Calum has won a clutch of gold and silver medals at national Mods, including in 2005, winning the National Mod Junior Advanced Clàrsach competition and the following year the Clàrsach Recital competition. He has also enjoyed consistent success in the harp competitions of the Edinburgh Competition Music Festival, and in 2007 was awarded the prestigious Harp Medal for a 15-minute recital, the highest award one can win at the Festival.

A fluent Gaelic speaker and passionate about the language, Calum sings Gaelic song, both unaccompanied and with clàrsach accompaniment.

Calum is a dedicated, hard-working and talented musician with enormous potential.

After some research, Calum ordered a Mark Norris Lute-Back harp in American Black Walnut. Since delivery of his new clàrsach, Calum has played at a number of high-profile events, including some by invitation of the Clàrsach Society. He played in the opening ceremony of the International Pan-Celtic Festival in Donegal Town and subsequently won the three harp competitions he entered at the festival.

Calum writes, “Having a quality instrument at this stage of my musical development has given me tremendous confidence in my performance. I plan to take part again in [2009’s] Royal National Mod in Oban, and have been booked for several Fringe concerts at [2009’s] Edinburgh Festival.”

Having a quality instrument at this stage of my musical development has given me tremendous confidence in my performance.