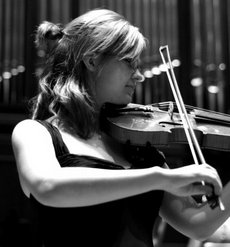 Please convey my thanks to the trustees … This money has meant that I can give full attention to my studies in London this year without the worry of financial stress.

Caroline Sharp has lived in the North-East of Scotland all her life. She is already recognised as one of Scotland’s foremost young violinists.

Caroline’s ambition is to become a professional musician. She is equally proficient on the piano. Caroline has been offered places to study music by four of the country’s leading conservatoires, and has chosen to study at the Royal Academy of Music in London under Maurice Hasson.

Caroline is considered to be a young artist of exceptional merit, one who combines the innate natural talent to produce the most glorious violin sound with artistic temperament, technique and a flair to perform. Her teachers at the ACMS believe that under Maurice Hasson, Caroline has the opportunity to develop her potential fully and become one of the best violinists Scotland has produced.

The Dewar Arts Award will help Caroline with the considerable expenses related to studying in a major city. In her first year at the Academy, Caroline writes that she learnt more than she possibly imagined she would. In her end of year performance, she achieved a staggering 90% and gained a Highly Commended in the John Waterhouse Prize.

During her second year Caroline joined the European Union Youth Orchestra and in 2009 toured Europe with Vladimir Ashkenazy and Andrew Litton. A highlight of Caroline’s third year was performing as a soloist in Glasgow and Blackheath, London. In 2010, she toured again with the EUYO playing in some of the most prestigious concert halls in Europe, including the Royal Albert Hall during the BBC Proms.

Caroline graduated with a degree of music performance from the Royal Academy of Music, gaining a first in her principal study, violin.  She is pursuing a career as a professional musician.

Please convey my thanks to the trustees … This money has meant that I can give full attention to my studies in London this year without the worry of financial stress.