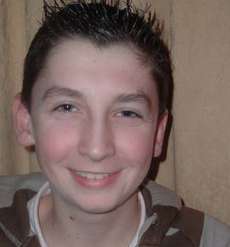 I am extremely grateful for the fact Charles has been successful in his award. (Theresa Gallagher, mother)

Glaswegian Charles Gallagher plays both fiddle and concertina. Having started out by playing Irish Traditional Music on the fiddle, a few year’s ago he was given a concertina on loan to try and since then he hasn’t looked back. After only six months of playing, he came third in the British Championships. At the age of 13, Charles is now the under 15 Scottish and British concertina champion and his tutor considers that he has potential to achieve so much more.

In 2003, Charles was a member of the under 12 Grupai Ceoil, part of the music society, Comhailtas, which brought back the All Ireland Championship cup for the first time in 47 years. As a result the group performed at a concert in Edinburgh hosted by Phil Cunningham and Ally McBain.

Charles oozes talent. He picks up tunes and technique very quickly, and his tutor struggles to find pieces that will continue to stretch and challenge him. Seemingly effortlessly, he shows a remarkable ability to pick up melodies by ear and come up with interesting arrangements for the school’s traditional music group to perform.

Charles is both technically outstanding and naturally musical, and demonstrates an affinity with the concertina rarely seen in one of his age.

The Dewar Arts Award enables Charles to purchase a professional concertina of his own.

I am extremely grateful for the fact Charles has been successful in his award. (Theresa Gallagher, mother)