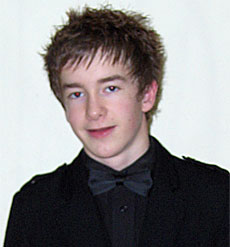 Teenage piper, Chris MacDonald, started playing the bagpipes at 10 and is now one of the top young solo pipers in Scotland.

He is the first piper from Inverness to become a member of the National Youth Pipe Band. To achieve that honour he had to undergo a three-day audition and face competition from 200 other young hopefuls.

His aim is to study traditional music at the RSAMD, Glasgow.

The Dewar Arts Award enabled Chris to upgrade his bagpipes to a set of McCallum Bagpipes, which will help him continue to play at the level he is required.