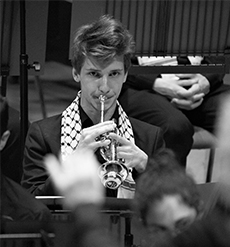 "I can't thank Dewar Arts Awards enough for the assistance, I feel it came at the most crucial of times in my early career."

Born in Edinburgh, trumpeter and vocalist Christopher Roberts showed prodigious talent from a very young age, quickly developing a full register, flexibility and clear articulation.  He began playing the trumpet from the age of 7, and from the age of 15 held the position of Principal trumpet in the Edinburgh Youth Orchestra.

In 2007, Christopher accepted a full scholarship place at St. Mary’s Music School where he studied with Bede Williams and John Kenny. During this time, he performed regularly, gaining professional experience with orchestras and ensembles in the UK and abroad. In 2014 he was a member of the KLANGSPUREN International Ensemble Modern Akademie where he studied with Sava Stoianov, and he has also studied with John Wallace, Tom Poulson and Mark O’Keeffe.

Making his concerto debut at the age of 15, Christopher has subsequently appeared as a soloist throughout the United Kingdom playing with the Milne-Graden Chamber Orchestra, Heisenberg Ensemble and with the world renowned Choristers of St. Mary’s Cathedral.

As a founding member of Carnyx Youth Brass, Christopher has been involved in many projects for ensemble, premiering new works for brass and featuring as the principal trumpet on the CD ‘Storm Chaser’. Christopher has been a major prize winner at festivals in Edinburgh and Glasgow.

While a student at the Royal Conservatoire of Scotland, Christopher was conductor in residence with Brass Sounds Inverclyde. During this time, he proudly represented Scotland with SCOKENDIA, featuring as part of the 2014 Glasgow Commonwealth Games. He has taken part in numerous impressive masterclasses, as well as studying with Professor Urban Agnas and Professor Friedemann Immer at the Hochschule für Musik und Tanz, Köln.

Christopher received an award to help him to continue to flourish in his bachelor degree studies at the Hochschule für Musik und Tanz, Köln.

"I can't thank Dewar Arts Awards enough for the assistance, I feel it came at the most crucial of times in my early career."