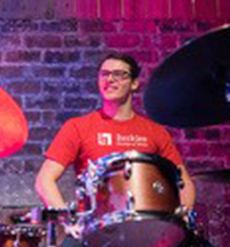 "I cannot express how amazing it feels to be a Dewar Artist, and how grateful I am for the award...I would not be able to take up my place at Berklee if it wasn’t for the help that Dewar has so graciously given me."

Ciaran is a multi-instrumentalist from Dundee, who started taking lessons on the drums, piano and vocals at school as a way to cope with bullying from his classmates. Ciaran is autistic, which presents challenges for him in everyday life (such as social interactions, mental processing and understanding how other people think). However, music is something that comes very easily to him, and in which he has been able to flourish.

Having studied jazz and improvisation since the age of 15, Ciaran was inspired by greats such as Ella Fitzgerald, Herbie Hancock, Elvin Jones and Charlie Parker.  This led him to aspire to his dream of attending Berklee College of Music and becoming a professional musician.

On achieving an offer from Berklee, Ciaran engaged in a campaign to gain the funding required to cover his studies.  He agained support and endorsement from trusts, individuals and celebrities including Curtis Stigers and five-times Grammy Award winner Antonio Sanchez.

Ciaran has achieved some major milestones, including headlining in the Dundee Jazz Festival with his Trio, performing for the US Consulate, playing at the famed Ronnie Scott’s Jazz Club in London, and performing for the Royal Family at Windsor Castle. He has played with top UK musicians such as Liane Carroll, Alan Benzie, Pete Johnston, Gordon McNeil, Malcolm Edmonstone, Jules Jackson, and Rick Taylor. He has also had the opportunity to play with Grammy-winner and Berklee film scoring faculty, Claudio Ragazzi.

Ciaran hopes that his studies at Berklee will enable him to meet and have the opportunity to play with some of the best international young talent, as well as some of the music industry’s top performers.

He aims to specialise in Jazz, as well as continuing to perform in multiple genres by leading his own groups and performing with other ensembles as a “sideman”. He hopes to tour internationally, to become an accomplished composer and arranger, and also to become an educator, an autism activist and a motivational speaker.

Ciaran’s Award supported him in achieving his dream of studying at Berklee College of Music.

"I cannot express how amazing it feels to be a Dewar Artist, and how grateful I am for the award...I would not be able to take up my place at Berklee if it wasn’t for the help that Dewar has so graciously given me."