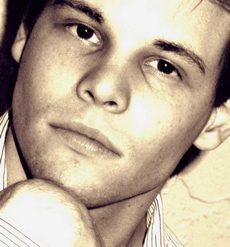 [My first year at Eastman] has been an exciting one. I have been happy, sad, amazed, disappointed and at all times overwhelmed with the whole experience.

A graduate of St Mary’s Music School in Edinburgh, David, from northern Scotland, is a trumpeter of enormous potential. Born in Munster, Germany, he was first introduced to music through the Kirkintilloch Silver Brass Band at the age of 9. He decided that he wanted to become a world-class trumpeter.

Throughout his early career, David has been a member of a variety of orchestras including the Edinburgh Symphony Baroque Orchestra, the National Youth Orchestra of Scotland, the Scottish School’s Orchestra, the Eastman School Symphony Orchestra and Eastman Wind Orchestra. He is also a keen chamber musician.

David has won a number of music prizes including, in 2005, the Scottish Concerto competition playing the Shostakovich trumpet and piano concerto with fellow Dewar Arts Awardee, Chris Guild.

David gained an undergraduate place at a number of music colleges in the UK and in the US and decided to accept Eastman School of Music, Rochester in order to study with the renowned trumpeter, James Thompson.  He has also attended masterclasses and had lessons with Robert Early, Angela Whelan, Patrick Addinall and Mark Gould.

The Dewar Arts Award is funding David to study at the Eastman School of Music, Rochester for four years.

David successfully graduated with a degree in trumpet performance.  During his studies at Eastman, David discovered a love and aptitude for conducting.  He continues to live in the States where he is pursuing a career in conducting.

[My first year at Eastman] has been an exciting one. I have been happy, sad, amazed, disappointed and at all times overwhelmed with the whole experience.