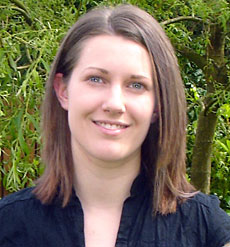 I am delighted that the trustees have decided to grant me a most generous award. The award means that I can plan my move to Manchester without worrying that it all might fall through

Diana Simpson is one of the very few electroacoustic composers supported by a Dewar Arts Award.

For the uninitiated, an electroacoustic composer records sounds and transforms them using computer software to create complex sound environments. A range of resources are used to realise this music, including instruments and voices, improvisation, graphic scoring, live electronic processing on laptop and surround sound.

Hailing from Glasgow, Diana started her studies at the RSAMD, Glasgow graduating with a first in composition and going on to gain a masters with distinction. She shone as one of the best and most original composers her tutor had taught in his ten years at the RSAMD.

Several of Diana’s works have already been performed in public.  For more information and to listen to samples of Diana’s work, see www.dianasimpson.org.uk.

She has won three international prizes, the most recent being the prestigious 33rd Bourges International Competition of Electroacoustic Music, part of the prize includes four weeks in a studio overseas and attendance at the 2007 Bourges festival.

As she works towards completing her PhD in 2009, Diana has had an eventful few years since receiving her Award. Her work has been performed internationally and she has been recognised in a number of prestigious competitions, including second prize in L’Espace du Son Concours de Spatialization Pour L’Interpretation des Ouvres Acousmatiques 2008 and winner of Prix SCRIME 2007. She has also completed composer residencies in North America and Sweden.

Diana takes up a full-time post at Kingston University, London in late 2009 where she plans to pursue her own composition and research as well as encouraging the next generation of young composers.

In April 2009 Diana was announced as the recipient of a Distinguished Achievement Award from the University of Manchester for ‘University Postgraduate Student of the Year’. Congratulations to Diana.

I am delighted that the trustees have decided to grant me a most generous award. The award means that I can plan my move to Manchester without worrying that it all might fall through