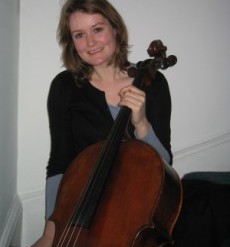 Eilidh was born in Dingwall and brought up in Skye. She is a former pupil of St Mary’s Music School, Edinburgh, before winning a Foundation Scholarship to the Royal College of Music, London where she studied with Margaret Moncrieff and Steven Doane. Doane writes, “Eilidh is one of the most intensely musical young people it has ever been my pleasure to teach. I believe she is one of Scotland’s finest young artists, and will bring great credit to her country.”

Among the several prizes Eilidh won at the RCM was the prestigious graduation prize, ‘Earl of Dalhousie Award’, for outstanding potential.

She then went on to study for a Masters at Eastman School of Music, Rochester, followed by a year in Amsterdam studying with Gregor Horsch, Principal of the Concertgebouw Orchestra.

During her studies, she has been supported by many prestigious awards and scholarships, and in fact would not have been able to take up the opportunities she has had, were it not for this financial support.

Eilidh is part of the young Scottish-based chamber group ‘Ensemble na Mara’ whose debut recital will be in February 2007. Future recitals include several in the Wigmore Hall, London and one at the 2007 Edinburgh Festival for the Royal Overseas League, whose Ensemble prize the group won in 2006. She also is a regular guest player with the Scottish Chamber Orchestra.

Eilidh writes, “I am very keen on the idea of musicians performing in all sorts of situations, whether in the Wigmore Hall or village halls and want to experiment further with innovative programmes including contemporary Scottish composers to attract new audiences.”