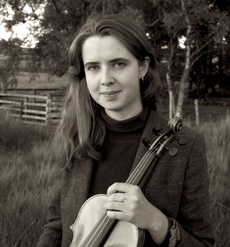 Georgina MacDonell Finlayson is a violinist, composer, sound artist, and community arts practitioner from the North East of Scotland. She enjoys a varied portfolio of composing, performing, and teaching in both classical and traditional styles, and has a particular interest in multi-disciplinary performance.

In 2019, Georgina graduated from The University of Edinburgh with a first class degree in music, studying violin with Ruth Crouch. She frequently gave solo and chamber recitals, often sitting section principal in the university orchestras and in her final year leading Edinburgh University String Orchestra.

Her experience playing with orchestras and ensembles across Scotland and the UK include Nevis Ensemble, National Youth Orchestra of Scotland, NYOS Futures and Camerata, Kellie Consort, Edinburgh Contemporary Music Ensemble, Dundee Symphony Orchestra, and major festivals such as the BBC Proms, Edinburgh International Festival, and the Edinburgh Fringe.

Georgina is also a performer and composer of traditional music, often working with live storytelling and theatre. She has appeared at the Scottish International Storytelling Festival and the Audacious Women Festival.

During her time at Edinburgh, Georgina began to find her own compositional voice, studying with Gareth Williams and Pippa Murphy. As a composer, her works have been played by members of the Scottish Chamber Orchestra, Red Note Ensemble and Any Enemy, performed at Aberdeen’s soundfestival and broadcast on BBC Radio 3’s New Music Show.

After graduating in 2019, and with thanks to the support of the Dewar Arts Award, Georgina started an MMus in violin performance at the Royal Northern College of Music studying with Cath Yates and Pavel Fischer.