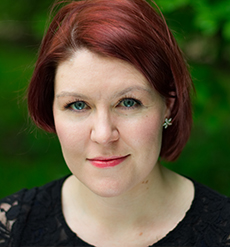 "I am so very thankful for my Dewar Award. It would have been impossible for me to participate in the masterclasses without financial help and I'm incredibly grateful for the generous support that I have received."

Grace is originally from Lincolnshire and went on to study at The Royal Welsh College of Music and Drama with Suzanne Murphy.  She graduated in 2014 with an MA in Opera Performance and a 1st Class BMus (Hons).  During her time at RWCMD she has appeared in concerts with the College Chorus and Symphony Orchestra as well as lunchtime recitals as a chorus member and as a soloist.  After moving to Scotland in 2014, Grace studied with Patricia MacMahon.

In scenes, she has also sung: Componist in Ariadne auf Naxos (with orchestra), Rosina in Il barbiere di Siviglia, Dorabella in Così fan tutte, Carmen, Idamante in Idomeneo, Cendrillon (with orchestra), Meg in Falstaff, Charlotte in Werther (with orchestra) (all RWCMD), and Hansel (Opera’r Ddraig).

Grace was a finalist in Ljuba Welitsch International Vocal Compeition 2017, Les Azuriales competition 2016, semi-finalist in The Mozart Competition 2013, a finalist in The Thelma King Award 2013 and 2014, and she was chosen to compete in the prestigious Kathleen Ferrier Bursary Award in 2009. Additional engagements include: Prince Charmant in Cendrillon (Fife Opera) and Chorus in Edgar (Scottish Opera).

In 2018, Grace was chosen to participate in the residential Song Masterclass with Malcolm Martineau at Crear Space to Create. Her Dewar Arts Award enabled her to take up this opportunity.

Grace writes; “The masterclasses have truly been a turning point for me, as they gave me a safe environment to explore and discover different repertoire whilst finding new confidence in myself and in what I have to offer as an artist.”

"I am so very thankful for my Dewar Award. It would have been impossible for me to participate in the masterclasses without financial help and I'm incredibly grateful for the generous support that I have received."