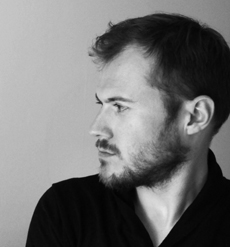 The Dewar Award's contribution will provide vital financial assistance to complete the MFA course and allow me to realise the potential development and opportunity it offers. Without this valuable contribution I would have been unable to fully capitalise upon the knowledge and expertise I will gain here in Sweden.

Greg grew up in Glasgow, and in spite of considerable financial restrictions was determined to develop his passion for art and his skills as an artist.  Through hard work and dedication, Greg gained a first class honours degree in Art History & Theory from St Andrew’s University as well as a BA with distinction from the Glasgow School of Art.

Post-graduation, Greg went on to win The Arches in Glasgow’s first annual Black Box award. He also began to exhibit his work in solo and group shows nationally and internationally.  In 2008 he was included in the Edinburgh City Art Centre’s Travelling Gallery exhibition Re/Trato, alongside artists such as Kenny Hunter and Sean Gladwell.

Still retaining close contact with Glasgow, Greg began to undertake periods of research in other countries such as Cuba, France, Spain and the Netherlands where he completed a residency at Kaus Australis, an independently run art organisation in Rotterdam.

Whilst developing his practice, Greg found a growing commitment towards advancing social engagement through his art.  As a result of this focus as well as his “exceptional capacities as an artist that can benefit still from an educational context”, Greg was offered a place on the highly competitive MFA course at the University of Gothenburg, Sweden.

Greg’s award provided subsistence while he studied for the MFA in Sweden, which included a highly rewarding six month period working in Italy for American artist Mark Dion on an ERASMUS placement.  This course has a strong focus on social engagement, allowing him to further develop his talents and interests whilst studying at the highest level.

During his time as a postgraduate student, Greg has won recognition for his hard work by winning several grants and awards, including the Otto and Charlotte Mannheimer stipedium.  He was also selected by a jury of prominent Swedish artists and academics for inclusion in the Akademiska Hus exhibition of publically engaged art, ‘Art of Change’ in September 2013.  Titled ‘Forspel’ (Prelude) the piece worked with local Roma street musicians to explore the politics of public space (see below).

The Scotsman: Over Arching Principle feature

The Sunday Herald: From The Far Side feature

The List: Only the Brave interview (for The Human Image project)

Where a Singular Will Provokes Collective Action – realised at Kaus Australis, Rotterdam

The Dewar Award's contribution will provide vital financial assistance to complete the MFA course and allow me to realise the potential development and opportunity it offers. Without this valuable contribution I would have been unable to fully capitalise upon the knowledge and expertise I will gain here in Sweden.