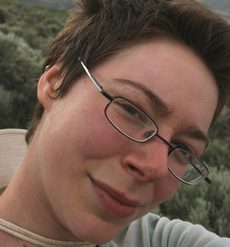 I am so very grateful for my Dewar Award. The faith and the funding it represented renewed my faith in my own creative purpose.

Jen Hadfield has worked as a professional poet since 2002 when she received a writer’s bursary from the Scottish Arts Council. Her first collection, Almanacs, was published when she was 27 and won first prize in the Society of Authors’ Eric Gregory Awards in 2003.

Her Gregory Award funded an extended reading tour in Canada and the US, during which time she produced her second collection of poetry Nigh-No-Place which is due to be published in early 2008.

She is considered to be one of the brightest and most talented poets of her generation working in Britain. Her work displays verve and panache and her descriptions of landscape and natural forces is quite unique.

A permanent resident of Shetland since 2006, Jen is taking her work in a new direction to bring literature and visual arts together. In 2006 she exhibited at the Peedie Gallery in Orkney, a prototype of the folk-art she intends to develop.

The Dewar Arts Award will fund Jen as she realises Nigh-No-Place, a collection of contemporary miniature landscapes of Shetland onto tin and found objects, with text.

Congratulations to Jen for winning the T S Eliot Prize 2008 for Nigh-No-Place.

Previous winners of this top poetry prize include Sean O’Brian, Seamus Heaney and Ted Hughes.  Chair of the judges, Andrew Motion, said, “We are absolutely delighted that Jen Hadfield has won this year’s T S Eliot Prize.  Nigh-No-Place shows that she is a remarkably original poet near the beginning of what is obviously going to be a distinguished career.”

Jen writes that, “The Dewar Award represented a green light to put my creative work first for most of a year… I consider the Dewar Award to have marked a crucial stage in my developing confidence as an artist in multiple disciplines.”

Winner of the Society of Authors’ Eric Gregory Awards in 2003.

I am so very grateful for my Dewar Award. The faith and the funding it represented renewed my faith in my own creative purpose.