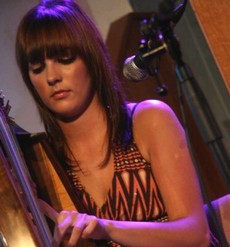 This is such a great contribution to my new harp and I am extremely grateful.

Born in Inverness and brought up on Skye, June learned the harp when she was 12 years old. June spent a year studying at the National Centre of Excellence in Traditional Music in Plockton before going on to study at Strathclyde University, where she is studying with renowned Celtic harpist Savourna Stevenson.

June is a member of award-winning band ‘Bodega’, winners of the BBC2 Young Folk Award. With the band’s increasing success, they travel extensively internationally to perform, and consequently June’s student-model harp is beginning to look careworn. June is considered to be a real talent and rising star in Traditional Music.

After buying a new harp, June went on to study music at the University of Strathclyde where, on graduation, she won the prestigious Alexander Stone Award for excellence. She is a member of the successful five-piece band Bodega, winners of the 2006 BBC Radio 2 Young Folk Award Winners and the 2009 Folk Band of the Year at the Trad Awards. The band tour worldwide and are currently working on their third album.

This is such a great contribution to my new harp and I am extremely grateful.