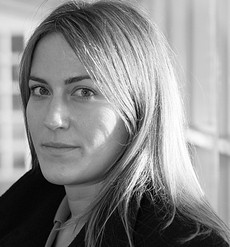 I am absolutely delighted with the trustees' decision, not to mention deeply grateful... I am very excited about making the film and about GI, I know it will be a very challenging and important time for me.

Born and brought up in Edinburgh, Katri Walker moved to Glasgow to study for her degree in Fine Art/Sculpture at the Glasgow School of Art. She graduated in 2002 with a first-class honours degree.

Since graduation, Katri has lived and exhibited in Mexico, Finland and Australia. In 2006 she was invited to take part in the Next Wave Festival, with 5 other Scottish artists, as part of the Youth Cultural programme in Melbourne, held at the same time as the Commonwealth Games. In 2005 she returned to Glasgow to pursue a prestigious Master of Fine Art at the GSA

Katri works in a variety of media, including photography, drawing and film and video. Her films are short, direct and, employing tragi-comedy as a tool, she frequently deals with aspects of interpersonal relationships.

Katri has been invited to exhibit in the third Glasgow International 2008 in a joint show with the internationally recognised Spanish artist, Dani Marti. Katri is considered to be one of the best young artists working in Scotland today and expected to become one of the most outstanding artists of her generation.

Her planned exhibit, to create a short film on one of the ancient cultural traditions found in Mexico, won universal support of the trustees.

The Dewar Arts Award will go towards the expenses to creating Katri’s exhibit for the Glasgow International 2008.

Katri writes after her duo-exhibition at the 2008 Glasgow International Festival of Contemporary Art, “The public outcome of my project .. has been a really important step in my career. The response [to the duo-exhibition] was overwhelmingly positive, not only from the public but the media also.”

Katri subsequently undertook a 3-month residency in Perth, Australia and exhibited there in early 2009.

Katri features in our 10th Anniversary Exhibition at the Royal Botanic Gardens in Edinburgh.

I am absolutely delighted with the trustees' decision, not to mention deeply grateful... I am very excited about making the film and about GI, I know it will be a very challenging and important time for me.