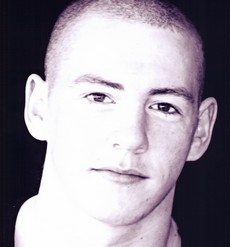 I would just like to thank the trustees for their consideration and would like to tell you how much this award will help me through the rest of this year.

Paisley-born Kevin Young’s story is pure ‘Billy Elliott’. His first dance teacher well remembers him as one of a group of boys who would hang about outside her dance classes annoying the girls as they entered and left the classes. But it later emerged that his real interest was in what went on in the dance classes inside the building, and eventually the dance teacher invited him to come inside and have free dance lessons.

She writes “from the first moment … as he walked into the dance studio dressed in his football strip and baseball boots I always knew there was something special about him.” Kevin went on to devote himself to hard work to developing his dance technique. He happily stood at the barre alongside girls half his age, learning the basics.

Kevin is the perfect example of hard graft, passion and self-belief being as vital to ultimate success as natural ability. He is an exciting performer already and commands the stage whenever he performs. Moreover he is an inspiration to youngsters from his area who well remember what he was and can see what he now has the potential to become. Kevin has won an international group hip hop championship and the UK solo hip hop and street competitions.

The Dewar Arts will help towards the costs for Kevin to study at the London Studio Centre.

After a successful first year, Kevin writes, “My year at London Studio Centre has been one of the best years of my life, I have felt such a progression in all aspects of my dancing, acting and singing.” His support has been extended for a subsequent year.  Kevin’s support was continued into his final year after a successful second year.

After successfully graduating with a degree in dance, Kevin was signed by a musical theatre agent and has auditioned for the UK tour of Footloose.  He has appeared as a dancer on BBC’s Strictly Come Dancing, The Royal Variety Show and later in 2010 will be performing in both Hong Kong and Beijing.  He has choreographed for the Kinisi Dance Company which is something he hopes to do more of in the long-term. For more information, see: http://www.kevinjamesyoung.com/_/Welcome.html

I would just like to thank the trustees for their consideration and would like to tell you how much this award will help me through the rest of this year.