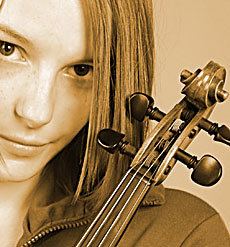 In the words of one of the leading teachers of Scottish Traditional Music, Lauren is “quite simply the best I have ever seen”.

Lauren was brought up in Fortrose in the Black Isle and is musically rooted in the traditional music of the Highlands.

She made an impressive start to her early music career by winning the 2004 BBC Radio 2 Young Folk Musician of the Year award, while still a student at the RSAMD in Glasgow. Her success highlighted not only her technical ability, but an emotional maturity well beyond her years.

After winning the prestigious title, Lauren made a notable appearance at the Cambridge Folk Festival, considered to be the jewel among the international folk festivals.

The next logical step in her burgeoning career was to produce a marketable CD, which would also afford her the opportunity to experiment and grow musically.

Lauren’s debut CD, “When Leaves Fall”, was launched in March 2007.  A subsequently album “Strewn with Ribbons” was released in May 2009. In late 2009 she was nominated for the “Instrumentalist of the Year” at the MG ALBA Scots Trad Music Awards.  For further information, see www.laurenmaccoll.co.uk.