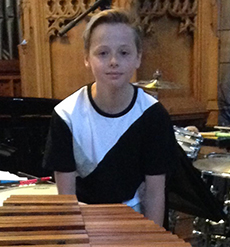 "I’m so grateful to have been given back the opportunity to be taught by the best Scotland has to offer. My dream of being a professional percussionist can live on."

Lewis has been playing percussion since the age of 3, and by 14 had reached the standard associated with studying at degree level. He is also a talented trumpet player and pianist.

Having been given a drum kit at Christmas, Lewis began dedicating all his time to improving his skills, including busking in Glasgow with his brothers. The family ended up on Real Radio and STV.  Lewis’ passion for percussion continued when he auditioned for The Royal Conservatoire of Scotland at the age of 7.  At that stage he played drum kit, snare drum and a set of timpani drums (which he bought with the proceeds of his busking).  He was awarded a place in the pre-junior department and was taught there by Lachie Birch, who also introduced Lewis to the marimba.  This has become his favourite instrument.

Lewis is severely dyslexic, which he feels benefits his music due to the right side of his brain being especially strong. As well as gaining a place at RCS, Lewis was accepted into the National Youth Orchestra of Scotland every year since the age of 9, progressing from the junior to senior orchestras. He has performed in a jazz collective, RCS orchestra, NYOS orchestra, percussion ensemble and RCS choir along with perfoming in stage shows and with ceilidh bands.

In the future, Lewis intends to apply to RCS and further afield; to the Royal Academy of Music in London and Julliard in New York.  His plan is to be a solo percussionist like Evelyn Glennie, playing in an orchestra and teaching.

Lewis’ Award enabled him to continue his studies at the Royal Conservatoire of Scotland.

"I’m so grateful to have been given back the opportunity to be taught by the best Scotland has to offer. My dream of being a professional percussionist can live on."