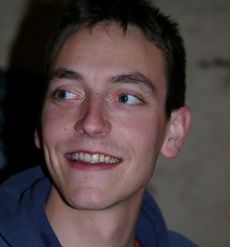 Malcolm Cruickshank is a graduate of Cumbria Institute of the Arts and his ambition is to develop a successful career in the applied arts.

Born and brought up in Edinburgh, Malcolm is an innovative designer and maker. He excels at combining the unusual and unconventional to create well designed objects that function.

These objects have ranged from ‘wearable art’ to lighting and seating and incorporate embroidery, weave, felt, rubber and ‘found materials’. He is particularly ingenious at seeing the potential in recycled materials.
Since a young boy, Malcolm has been fascinated by the whole process of craft making and impressed craft workers whom he spent time observing with his passion and raw creativity.

One of the solo exhibitions which Malcolm was offered in 2006, titled ‘Haute Kilture’ to present a range of alternative kilts and accessories, was supported by an Award.

Before the exhibition opened, Malcolm was offered a six-month appointment by Midlothian as a schools’ Artist in Residence. He writes, “I have no doubt that [this award] must have been at least a contributing factor to their final decision.”

After the exhibition, Malcolm was approached by a London gallery who wished to mount his exhibition during London Fashion Week in March 2007. In March 2008 he received the Morton Fraser Award from Visual Arts Scotland.