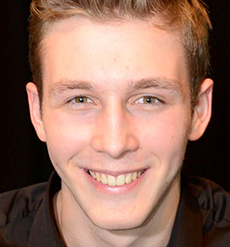 "A Dewar Arts Award [will] greatly help to set me on this training path required to reach my full potential and...achieve my goal of becoming a professional opera singer on the international stage"

Marcus’ first foray into singing was with the The National Boys Choir of Scotland when he was 11 years old.  At the age of 14 he showed prodigious talent, described by tutors as “an extremely exciting young tenor with huge potential” and “the most outstanding young singer of this age group that I have taught.”

Marcus studied under Kathleen McKellar Ferguson, lecturer at The Royal Conservatoire of Scotland. At the age of 15 he performed the tenor solo “Like a Singing Bird” by Chilcott in Glasgow Royal Concert Hall accompanied by the National Boys Choir of Scotland.  He then successfully auditioned and gained a place on the Scottish Opera Connect Course for young singers, and took part in performances alongside professional singers.

Marcus was chosen to take part in a masterclass with Judith Howarth, and in 2015 gained a coveted place in the tenor section of The National Youth Choir of Scotland.  He toured to France as part of the choir, taking part in the Berlioz Festival at La Cote St Andre, conducted by Sir John Eliot Gardiner.

In 2016, Marcus was awarded the Winifred Crawford Smith Medal for the under 18 recital at The Edinburgh Competition Festival, was invited to take part in the end of festival concert in The Queens Hall, and was awarded First Place at The Glasgow Music Festival for the Oratorio Under 18 Class Competition. He was awarded winner of the Rotary Club Young Musician 2016 Competition (Scotland & NE England Final), sang as part of the NYCoS choir at the London Proms in the Royal Albert Hall, and took part in a two-week tour to the U.S A. He then successfully auditioned to take part in a masterclass at the Junior Oxenfoord Course with Malcolm Martineau.

In April 2017, Marcus performed as the tenor soloist in two public performances of Handel’s “The Messiah” with Abbey Consort Choir.  He was just 18.

Marcus continued his studies at the RCS, tutored by Professor Stephen Robertson on the B.Mus Vocal Studies course. He has a genuine passion for opera and hopes to fulfill his dream of becoming a professional singer and performing on the international stage.

Marcus’ Award supported him in his studies at The Royal Conservatoire of Scotland, on the four-year Bachelor of Music vocal course.

"A Dewar Arts Award [will] greatly help to set me on this training path required to reach my full potential and...achieve my goal of becoming a professional opera singer on the international stage"