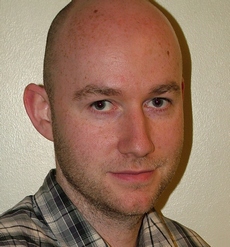 I would like to thank you for this award which will allow me to dedicate quality time to the research and development of my writing.

Martin started performing in school pantomimes and went on to study drama at college. After graduation he continued to work for a number of well-known Scottish theatres.
In 2005 he started writing, first for The Arches Theatre Company in Glasgow, and went on to write and produce two solo shows ‘Manifesto’ and ‘Zugzwang’, for The Arches Theatre Festivals which were both very well received by both audiences and critics. Martin is equally talented as a writer and as a performer and combines humour with intelligence to produce work of power and poignancy.

Glasgay! Festival spotted Martin performing at The Arches Festival and invited him to write and perform a show at their 2007 season. Martin says that this new piece would continue to explore modern male issues. He is interested in subjects that question what it is to be young, male and Scottish in today’s society.

He writes, “I am inspired by gender politics in today’s society and am aware of the press and media’s power to manipulate our viewpoints. I recognise there is a massive crisis affecting men, especially young men, and this informed my work.”

The Dewar Arts Award will help support Martin as he researches, writes and develops his show for the 2007 Glasgay! Festival.

Martin’s show ‘Reality’ was a critical success at the 2007 Festival. He was invited to restage his production at the Tron Theatre, also supported by a Dewar Arts Award.  The experience of writing, producing and performing ‘Reality’ gave Martin the confidence to develop his writing. Following its success, Martin has been commissioned to write a new piece for The Arches in 2009.

I would like to thank you for this award which will allow me to dedicate quality time to the research and development of my writing.