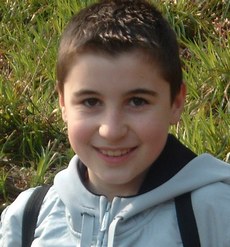 At the time of winning the award, Michael is the current under-12 All-Britain Slow Air Champion, and has won numerous other traditional music competitions. He has played at Celtic Connections, Fiddle 2004 and 2005, Ar Ais Aris in Buncrana, Co. Donegal and other Irish and Scottish traditional music showcases.

Glasgow-born Michael started playing the fiddle at the age of four. As both his older brothers are also keen traditional musicians Michael was exposed to traditional music from a young age. He quickly demonstrated his natural talent and flair for music.

Michael has above average artistic talent and potential for his age and the right temperament to perform on stage. He is one of the best musicians in his age group and has the talent, commitment and enthusiasm to go far. His aim is to become a professional musician, but needs an instrument to match his talent in order to progress.

The Dewar Arts Awards has enabled Michael to buy a Rab Cherry fiddle.

Michael writes that since receiving his new fiddle his standard of playing has vastly improved. He has since won a clutch of medals in duet, trio, ceilidh band and other group competitions. The achievements he particularly cherishes are winning the All-Scotland Solo Slow Air competition followed by coming 3rd in the British Championships in the 12-15 age group. In 2009 he came first in the Scottish Fiddle Solo competition and then 3rd in the British Championships again. Other highlights of the year were supporting fellow Dewar Arts Awardees, Kathleen Boyle and Lauren McColl, with his group Southside Fiddlers.

Michael says that thanks to his new fiddle, his musical ability and love for music have increased dramatically.