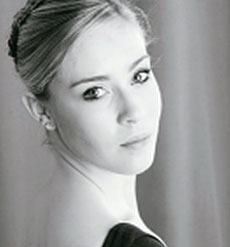 Nicole, from Wester Hailes in Edinburgh, has been dancing since the age of two. In 1999, then aged 12, she was the only Scottish girl to win a place at the prestigious Royal Ballet School.

In 2005, while still a student, Nicole was picked to tour with the Royal Ballet to Japan, Malaysia and South Korea. The same year, she was one of two students selected to do a Summer School of Excellence in New York at the American Academy of Ballet.

In her final report, the Royal Ballet says of Nicole that, “She is equally capable in classical, contemporary and dramatic works and has also produced many impressive choreographic works herself.”

Nicole graduated from the Royal Ballet School in 2006 and is currently auditioning with the major ballet companies. Because female dancers are returning to dance after starting a family – able to retain their fitness and performance quality throughout – this means that new graduates are having to wait a bit longer to get a start in a ballet company.