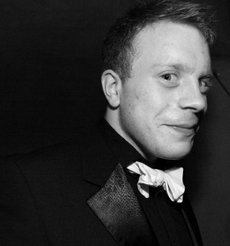 I am delighted to accept your generous award.

Edinburgh-born Patrick comes from a musical family, both his parents are musicians, and at an early age he showed himself also to be an exceptionally talented musician.

In 2007 Patrick won a Dewar Arts Award to attend the Beijing International Trombone Festival. Of his experiences there, he writes, “I had an unforgettable and extremely valuable experience and I cannot thank [the trustees] enough for their generous support, without which this incredible learning experience would have been completely impossible for me.”  Following the festival, Patrick had classes with Niels Ole-Bo Johansen at the Royal Danish Conservatoire and Pete Madson at the University of Nebraska, USA.

Patrick spent a gap year playing music and travelling the world. He went to India with the Ronak Baja Indian Fusion Band, to Toronto with the Tommy Smith Youth Jazz Orchestra and to Europe with the Carnyx Youth Brass to play at the Philharmonie Essen in Germany where his brass quintet was broadcast on German radio. He has been a member of the European Youth Jazz Orchestra, Edinburgh Youth Orchestra, Grand Union Orchestra, among many others. He has played in venues such as the Royal Festival Hall, Barbican and Queen Elizabeth Hall in London, the Usher Hall in Edinburgh and the Glasgow Royal Concert Hall.

In January 2009 Patrick was featured both as soloist and composer on the BBC Radio 3’s Jazz Line-Up with his composition ‘Turbulent Times’. Patrick is now studying classical and jazz music at the Guildhall School of Music.

The Dewar Arts Award is helping Patrick with the costs of studying in London at the Guildhall School of Music.

After a successful year, of which the highlights include being selected as a member of the London Sinfonietta Academy 2010 and reaching the semi finals of the BBC Young Brass Soloist 2010, Patrick’s funding has been continued for a further year.

After a further successful year at the Guildhall School of Music, the trustees were pleased to extend their support of Patrick into his final year.

I am delighted to accept your generous award.