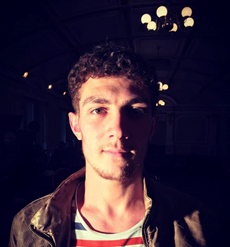 "To put it simply, this award has totally changed my life."

Petre was born, raised and schooled in Craiova, southern Romania. Whilst at school he developed a love for performance including physical theatre, comedic mime and dance.

Petre joined the school dance group, No Limits, and over a six year period entered multiple competitions and toured both nationally and internationally. The group appeared on numerous TV shows including Romania’s Got Talent, fuelling Petre’s desire to become a professional performer.

Petre lost his hearing as a young child.  Through contact with Glasgow’s Solar Bear Theatre company, he discovered the new course for deaf actors being launched at the Royal Conservatoire of Scotland in 2015. With no possibility of vocational performance training for the deaf in Romania, and finding an affinity to the city of Glasgow, . Petre became determined to gain a place on the ground-breaking BA Performance in BSL and English, and set about learning British Sign Language.

After a short audition process he was successfully accepted into the first cohort of the at the RCS, which opened his eyes to the wealth of disciplines and possibilities available in performance. As part of the programme, he was involved in the multi-media presentation ‘Dream On’ at Glasgow University celebrating Shakespeare 400, as well as acting in short films and several plays.

Petre’s dream for the future is to perform in theatre and film. He plans to be based in Scotland – his new home – and to combine his experience of dance and movement with new skills learned at the RCS. He aims to explore new visual theatrical forms of storytelling involving sign language and sign poetry, and to perform internationally.

This Award allowed Petre to continue his studies at the RCS, and to fully focus on his ambitions to become a performer. Without this support, he would have struggled to afford to stay in Glasgow and finish his degree.

Petre feels that, as a deaf actor, the opportunities that he has been able to access at the RCS have been exceptional, allowing him to develop skills and experience that he could not have achieved elsewhere. To put it simply, he says. this award has totally changed his life.

"To put it simply, this award has totally changed my life."