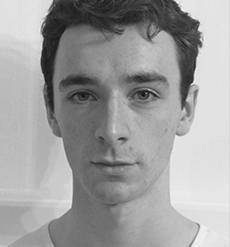 The Award has liberated me and allowed me to study at the most prestigious drama school in the world. Thank you.

Growing up on the Southside of Glasgow, Ryan Hunter is the youngest of five siblings, and the first to become an actor rather than a musician.

Ryan took music lessons at St Roch’s Secondary School in Royston, where he played the fiddle, drums and bodhran.  He performed across Scotland, England and Ireland with the school’s Ceili band, before taking to the stage with the PACE Youth Theatre in Paisley. From there he was accepted into the Musical Theatre Course at the Dance School of Scotland in Knightswood.

During his time at Knightswood, Ryan performed at the Citizens Theatre to much acclaim.  In his second year he gained a role in the comedic film ‘What We Did On Our Holiday’, acting alongside David Tennant, Rosamund Pike and Billy Connolly.

On completion of the course, Ryan stayed in Glasgow and busked beside the Donald Dewar statue on Sauchiehall Street while auditioning for roles.  He gained a place in a touring production with Hopscotch Theatre Company, which he completed whilse auditioning for drama schools.

After a gruelling four-round audition process for RADA, Ryan was one of just 28 students out of 4,000 applicants who gained a coveted place.  This offered an exceptional opportunity to study his craft at a most prestigious school.

Intelligent and well read, Ryan takes a serious and committed interest in his work as an actor. He has charisma on stage and screen, and looks set to be an excellent ambassador for Scottish arts in his future career.

Ryan’s Award enabled him to accept his hard-won place to study at RADA.

The Award has liberated me and allowed me to study at the most prestigious drama school in the world. Thank you.