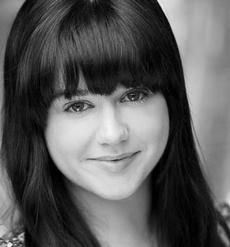 I very much appreciate this opportunity and what it enables me to achieve.

Wishaw-born Samantha Blaney began studying musical theatre at Motherwell College before going on to win a place on the RSAMD’s MA in Performance in Musical Theatre.

Samantha is considered to be a talented all-rounder, in drama, singing and dance, with a successful career in the theatre ahead of her. Her main reason for going back to college to pursue a Master of Musical Theatre was that she found herself in a point in her career where she felt she needed to expand her skills in order to sustain a long-term career in the theatre.

The Dewar Arts Award will contribute towards the costs of the tuition fees at RSAMD.

Samantha writes that the most rewarding part of the year was forming a repertory company with her fellow students and performing in three of the four productions the company took to the Edinburgh Fringe Festival. At the end of the year, after the showcases in Glasgow and London, Samantha was noticed by a clutch of industry representatives and was signed immediately by an agent. She was also approached by Channel 4 with a view to appearing in a short film.

I very much appreciate this opportunity and what it enables me to achieve.