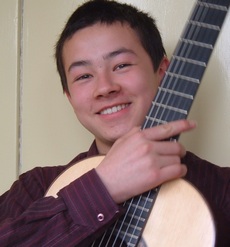 "I think of the Donald Dewar Trust every day when I pick up the guitar. I know I would not be where I am today without their support"

Sean’s first public solo was at the Queen’s Hall, Edinburgh when he was eight years’ old, as part of the Edinburgh Schools Showcase Concert. In 2007, still only 15, he performed his first full, solo public recital in Edinburgh. After the performance, the composer Haflidi Hallgrimsson approached him directly to invite him to collaborate on the reworking of Hallgrimsson’s piece ‘Jacob’s Ladder’, which Sean performed at the 2008 Edinburgh Fringe.  Still at the age of 15, he received scholarship offers from a number of leading UK conservatoires and took his place at RSAMD in 2007 as the youngest musician to ever enter the academy.

Sean has been a member of the NCOS, as a ‘cellist, and a member of the National Youth Guitar Ensemble of Great Britain, under Gerald Garcia. He has been a well known young player of classical guitar in Scotland since he was 11 years old. Sean is both an exciting prospect for the future as well as an engaging and talented performer of the present. He is one of the most talented young guitarists around today.

The Dewar Arts Award will enable Sean to buy a professional quality guitar.

In 2008, Sean was a finalist in the first senior competition he entered, the “Westfalian Guitar Spring” in Germany, and later that same year received the Chanterelle Guitar Prize.  In 2009 he won both the Silver Medal at the 5th Ligita International Guitar Competition in Liechtenstein and, later, the 12th Ivor Mairants Guitar Competition run by the Worshipful Company of Musicians. He was the first British winner of this prestigious event, which offers Sean the opportunity to audition for concert performances at the Wigmore Hall in London.

Following his achievement in Liechtenstein, Sean was offered a master class with the Cuban, Leo Brouwer, renowned composer for guitar. In 2011, Sean won the String Section prize of the Royal Overseas League Music Competition, only the second guitarist to achieve this.

Sean performed as part of our 10th Anniversary Celebrations. Find out more here.

Sean has gone on to become one of the most accomplished and celebrated guitarists of his generation.

Sean was the first ever guitarist to be selected as a BBC Radio 3 New Generation Artist. He has since been featured on numerous BBC programmes including ‘Front Row’, ‘Inside Music’, and a special series entitled ‘Sean Shibe’s Guitar Zone’.

In 2018, Sean received the Royal Philharmonic Society Award for Young Artists – the first ever guitarist to do so – and in 2019, won a ‘Concept Album’ Gramophone Award for his critically-acclaimed recording ‘softLOUD’. His latest album has topped the Official Chart for specialist classical music and he has recently signed a multi-album deal with Pentatone.

Sean has performed internationally at renowned venues and festivals, has appeared with world-leading orchestras and has collaborated with artists including the BBC Singers and performance artist/art filmmaker Marina Abramovic. His imaginative performance programmes include newly commissioned works, expanding the repertoire of the guitar and giving new voice to the instrument.

Sean is a truly exceptional Scottish artist and we are proud to have been part of his journey.

"I think of the Donald Dewar Trust every day when I pick up the guitar. I know I would not be where I am today without their support"