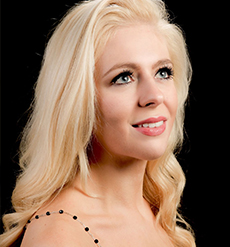 "I cannot thank the Dewar Arts Awards enough for their generous funding. Without their support, I would be unable to attend this wonderful institution and I am so grateful...for the chance to further my studies."

Stephanie has always had a passion for singing. She studied her undergraduate degree at the Royal Conservatoire of Scotland on a scholarship where she achieved an Honours Degree of the First Class. During her time there, she participated in a masterclass with Meribeth Bunch Dayme, received coaching from Rachel Nicholls and partook in many poignant choral engagements. She sang the role of Hermia in Britten’s A Midsummer Night’s Dream in the RCS Opera Scenes and was a member of the chorus of the Conservatoire’s production of Die Fledermaus in May of 2017.

Over the summer of 2017, she joined Opera Bohemia on their sell-out tour around Scotland as a member of the chorus in their production of Bizet’s The Pearl Fishers. She also attended her second British Youth Opera summer workshop as well as attending the Oxenfoord International Summer School.

Having gained a scholarship to study at the Royal Northern College of Music, Stephanie sang the role of Mercedes in Bizet’s Carmen in 40minutes, participated in a weekend residency with Opera North working with Nicholas Kok and Tim Albery, and sang in a masterclass with Andrew Shore. She was also involved in the first recording of Cellier’s Dorothy with Richard Bonynge and Victorian Opera Northwest singing the role of Phyllis (released in Febuary 2019 by NAXOS).

Stephanie was also a finalist in the Frederick Cox Award and has sang in various charity concerts and opera galas throughout the year. She portrayed the Sandman in RNCM’s spring production of Humperdinck’s Hansel and Gretel, conducted by Anthony Kraus and directed by Stephen Medcalf. She was also involved in Clonter Opera’s Spring Opera Showcase singing a variety of repetoire and working with Michael McCaffery and Anthony Legge.

Stephanie is very grateful to be supported by The Sir James Caird’s Travelling Scholarship Trust and the Dewar Arts Awards.

Stephanie’s Award supported her in studying on the Masters in Vocal Performance course the Royal Northern College of Music.

"I cannot thank the Dewar Arts Awards enough for their generous funding. Without their support, I would be unable to attend this wonderful institution and I am so grateful...for the chance to further my studies."