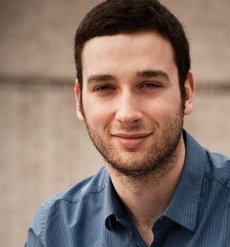 I am thrilled to have this opportunity to be associated with the Dewar Arts Awards and will do my utmost to do justice to this fantastic award.

Glasgow-born Tom Harrold has had his music performed and recorded in London, Amsterdam, York, Glasgow, Aberdeen – and Port of Spain, Trinidad and Tobago! Tom was a pupil at the Music School of Douglas Academy for almost six years before he was accepted by the Royal Northern College of Music in Manchester to study composition.

The son of professional musicians, Tom was winner of the 2007 BBC Proms/Guardian Young Composer’s Competition. His music has been performed and workshopped by members of the BBC Scottish Symphony, the BBC Symphony and the Aurora Orchestras and the Endymion Ensemble, along with the Ebor Singers. Tom has already received commissions from the BBC Proms, Scottish Philharmonic Orchestra and from several professional soloists.

In April 2009, Tom had a new work performed at the Fifth Summit of the Americas, and his piece “The Day is Done” was on the shortlist of three of the National Centre for Early Music/BBC Radio 3/Tallis Scholar Composer’s Competition. In the same year, he was joint winner of the Heriot-Watt University Young Composer’s Competition.

All these wonderful experiences and opportunities have fuelled his love for composing and confirmed in him a desire to become one of the foremost Scottish and British contemporary composers of his generation.

For up-to-date information on Tom’s work, visit his page on SoundCloud.

The Dewar Arts Award will help Tom in his first year at RNCM studying composition.

Demonstrating good progress, Tom’s Award has been continued into a second year, and subsequently, a third year.

29/04/13: Tom has been shortlisted for a commission from the Royal Philharmonic Society. making it into the final four entrants put forward by the Royal Northern College of Music. The chosen composer will write a fanfare to open the IAMA’s Montreal Conference this November and the London Conference in April 2014.

I am thrilled to have this opportunity to be associated with the Dewar Arts Awards and will do my utmost to do justice to this fantastic award.