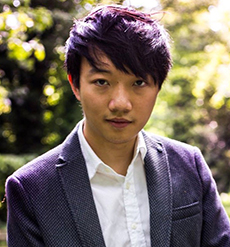 Wui Man (also known as Raymond) is a gifted pianist who moved to Aberdeen with his mother in the early 2000’s. Having no piano to use at home, Raymond would practise at school, and even during the holidays he continued to pracise there for hours every day.

Raymond audition for the Aberdeen City Music School, and at his audition he impressed the board with his considerable music potential and impressive motivation.  He was accepted as a student, allowing him to dedicate himself to his passion and talents.

The Dewar Arts Awards supported Raymond in his studies at the Aberdeen City School of music. He lived there as a boarder and was able to practise piano at any time.  This enabled him to quickly develop his skills, both in music and in his spoken English.

Raymond made his concerto debut with the Meadows Chamber Orchestra in Edinburgh in 2010. Crowned as the Aberdeen Young Musician of the Year 2011, he performed concertos with various orchestras in Scotland. He has given recitals at the Aberdeen International Youth Festival and the Fringe Festival in Edinburgh, and during his studies at ACMS he performed with a jazz band in venues such as the Blue Lamp, and the Edinburgh Jazz Bar.

Raymond has gone on to study at the Guildhall School of Music, and has received additional support from the Awards to facilitate his continued success.  He has won the Springboard Concerto Competition, leading to engagements with the Brighton Youth Orchestra. He continues to go from strength to strength and has a bright career ahead of him.