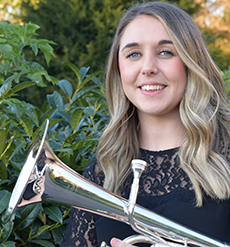 Whilst at school Rachel was awarded the Thomas H Stewart Memorial Award, for the highest placed Brass competitor in the Perform in Perth Festival, for three consecutive years.  After leaving school, she went on to study at the Royal Conservatoire of Scotland, where she graduated with a first class honours degree in music education. She has since worked as a music teacher in one of Scotland’s highest performing secondary schools.

Rachel has worked as a tutor and soloist with bands across Europe, including Germany and Denmark.  She has held the title of Scottish Open Solo Champion as well as the Bram Thomson award for best tenor horn for multiple years.

Alongside performing, Rachel was also the conductor of the Kirkintilloch Youth Band, winning a silver award at the Scottish Youth Band Championships in 2016.
She later gained a place to study a Masters in Performing at the RNCM, and is proud to hold the position of Solo Horn with the world famous Fairey Band.

As well as being a dedicated performer, Rachel is also a qualified secondary school music teacher, registered with the GTCS and with 5 years teaching experience in one of the top schools in Scotland. She has joined Sterling Musical Instruments as a performer and clinician and performs exclusively on a Sterling tenor horn.

Rachel’s award supported her in completing her Masters in Music Performing at the Royal Northern College of Music.

Thank you so much …I am delighted to be offered a Dewar Arts Award … I am very grateful to the trustees ..as this will help me a great deal with my studies.

Born and brought up in Aberdeenshire, Lliam is described as ‘a prodigious talent’ and ‘an irrepressible musician, both intellectual and practical’ possessing ‘artistic generosity’.

Lliam was a pupil first at Dyce Academy, Aberdeen and later at Edinburgh’s St Mary’s Music School where he studied composition, piano and horn. As a pianist, Lliam has been successful in competitions and festivals across the country and is considered to be a fine and gifted accompanist. He also plays the French horn to orchestral standard.

However, it is in his work as a composer where his prodigious musical talent is particularly evident. Lliam won a place on the National Youth Orchestra’s Composers’ Course for 2008-09. His compositions have been performed at the Sage, Gateshead, Leeds Town Hall, Aldeburgh, Royal Festival Hall, London and the RCM. In 2009 he won the Meadows Chamber Orchestra Commission Prize, who subsequently performed his piece at the Queen’s Hall, Edinburgh. In 2008 he won the Isobel Dunlop Composition Award. Both the Meadows Commission prize and the Isobel Dunlop Award were judged by James MacMillan.

The Dewar Arts Award will support Lliam’s studies at Cambridge.

After a busy and productive year during which Lliam was awarded the Padley Repetiteur Scholarship, the second prize in the Alkan Piano Competition and received numerous commissions for new compositions, his funding has been continued for a further year. After demonstrating progress in his second year, Lliam’s funding was extended for a third and final year.

Thank you so much …I am delighted to be offered a Dewar Arts Award … I am very grateful to the trustees ..as this will help me a great deal with my studies. 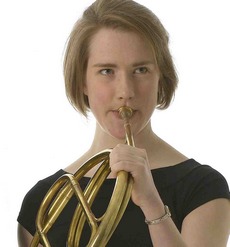 I would like to thank the trustees very much for their kind offer. I am looking forward to ... exciting opportunities to play baroque horn.

Lisa, from Hawick, graduated from Edinburgh University with a first-class honours degree in music and the final year dissertation prize.

As an experienced player of the French horn, Lisa developed an interest in the 18th century style of natural horn. She helped set up an ensemble at university whose repertoire includes music from the late baroque music era. In 2007, she performed on a classical horn the double horn concertos and orchestral suites by Telemann with the Edinburgh Philomusica and on natural horn Handel’s Water Music with the Edinburgh Symphony Baroque. For these occasions she was able to borrow instruments.

Lisa plans to continue her researches into the evolution of the hand horn technique. As she says, “There is lively debate amongst horn players and scholars as to the correct playing techniques and I am very excited about the prospect of contributing to our understanding of the subject.” Owning her own baroque horn would help Lisa pursue both her academic interest and to contribute to the musical community in Scotland.

The Dewar Arts Award has helped Lisa purchase her own baroque horn.

I would like to thank the trustees very much for their kind offer. I am looking forward to ... exciting opportunities to play baroque horn. 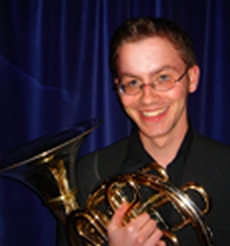 Hailing from Moray, Craig was nominated for an Award after he had been accepted to study music at RSAMD in Glasgow. He had been playing on an instrument that had seen better days, yet he had gained a place in the National Youth Orchestra, an exceptional achievement for a brass player who was still at school.

Considered by his tutor to be the most talented brass player to have come out of Moray, Craig won the Senior Solo Instrumental Recital class at the 2004 Moray Music Festival and was awarded an ‘Outstanding Certificate’, which is the highest accolade.

Now in his second year at RSAMD, Craig is principal of the National Youth Orchestra of Scotland.

Craig writes that since buying a new horn ‘my career as a musician has taken off’ and attributes all his achievements to the new French horn.

Craig joined the successful brass quintet Alba Brass, which became the ensemble in residence for the ‘Young Composer of Dyfed’ competition in Wales. Later the quintet was invited to accompany the First Minister of Scotland to San Francisco to promote Scottish culture.

Craig has played with a number of orchestras, which remains his final ambition, and writes that  having a new French horn has “really transformed my career and has given me the confidence to pursue my dreams.”