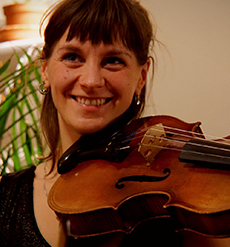 "I feel extremely grateful to be supported by the Dewar Arts Awards...it has given me a further boost of motivation and determination to develop as a musician and therapist."

Laura began her musical journey aged five, learning piano with her grandmother. She soon began immersing herself in the classical world further, studying the viola and flute. This led her to continue her education at St. Mary’s Music School.

Laura was awarded a scholarship to study at the Royal Northern College of Music in Manchester (RNCM). Here, she performed and learned with some of the world’s leading musicians, including the resident orchestra for the Montepulciano Arts Festival in 2012 and 2013.

Afrer graduating, Laura worked as a freelance viola player across the UK and Europe, playing with a number of different ensembles. She became engaged in international charitable work, providing musical respite for vulnerable individuals.  This inspired her to share her music with a range of audiences, and so she travelled around the world busking with her viola.

Laura believes that music speaks to everybody. She continues to expand her musical boundaries by pushing herself out of her comfort zone as often as possible. She performs in a range of settings – from nursing homes, community centres, bars and cafes, exploring ways to engage audiences outside of the classical spectrum.  She also records samples for music producers and DJs.

Laura’s work volunteering for charities led her to become a music therapist. She has since seen the benefits of her work in Romania and Bulgaria. She is driven to help people through a therapeutic relationship with music, and aims to share her knowledge with people who are vulnerable in society.  She aims to work in settings such as prisons, with refugees, and in countries that have suffered as a result of war.

Having chosen to undertake formal qualifications in music therapy, Laura aims to use her skills in creative and imaginative ways. She feels confident that she has embarked on the right path, and that Music Therapy will continue to direct her passion, energy and focus.

Laura’s Award supported her in studing an MA in Music Therapy at the University of the West of England.

"I feel extremely grateful to be supported by the Dewar Arts Awards...it has given me a further boost of motivation and determination to develop as a musician and therapist."