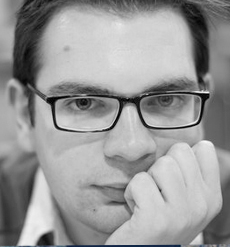 Growing up in Cumbernauld, Steven was encouraged from an early age to follow his dreams.  He was instilled with a great sense of ambition and a belief that with hard work and passion you can achieve anything, whatever your background.  Steven’s passion turned out to be film, and he set out to carve himself a career in cinematography.

Supported by a student bursary, Steven completed a BA(Hons) in Digital Film and Television at what was then the RSAMD (now the RCS).  His graduation film, Ghost Story (see below), was screened at the Glasgow Film Festival and received much attention, being nominated for a Royal Television Society Scotland Award and winning ‘Best Fiction’ at the Creative Loop Awards. Steven graduated with a first class degree and has returned to the RCS frequently to support other students as a mentor.  He has also worked freelance as a lighting camera operator.

Steven shows immense capacity for cinematography, making work that is both visually beautiful and thematically sophisticated.  He is an imaginative storyteller who communicates with unique vision, and has been hailed as “a real Scottish talent with unlimited potential”.

As well as honing his craft in film, Steven intends to continue sharing skills and knowledge with up and coming talent.  He says: “I have seen first hand how being taught and passed on knowledge by others with passion for their craft can have a transformative effect – it is through the inspiration and encouragement from my tutors/lecturers that has led to many of my successes so far and put me on the right path.”

Steven had always dreamed of studying at the National Film and Television School, and in 2011 he was offered a coveted place on the MA in Cinematography. This presented a fantastic opportunity for Steven to develop his technique in areas such as lighting, composition and writing, and would take him to the next stage of his burgeoning career. The Dewar Arts Awards supported him in taking up the two year course in London.

Steven went from strength to strength at the NFTS. His graduation film earned him a BAFTA Scotland 2015 New Talent Award nomination for Camera/Photography. Entitled Sick, the film tells the story of a lonely, isolated mother (see trailer below).

May 2014 – Article in Variety: Film North nominated for a Student Oscar

This award has quite literally been life changing, enabling me to push my visions and challenge myself at this critical time.

Kyle is a gifted fashion designer, originally from Greenock.  As an undergraduate he studied at the Edinburgh College of Art, where he learned about fashion, design, construction and illustration.  At the age of 22, he moved to London to take up a place on the RCA’s MA in Womenswear.

Whilst studying in London, Kyle proved himself to be a throughly committed and self-motivated individual, whose work is creative, highly relevant and underpinned with a strong technical awareness.  His aesthetic has been described as both polished and personal, and in 2011 he won the prestigious Karen Millen Portfolio Award at Graduate Fashion Week. He is an ambitious and innovative, a natural communicator, and has a bright future ahead of him.

The process of developing a final collection can be extremely costly.  Kyle’s Dewar Award supported him in this crucial stage of his studies, allowing him the freedom to test out new techniques and explore his full potential for innovation.

This award has quite literally been life changing, enabling me to push my visions and challenge myself at this critical time. 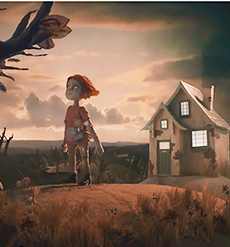 It excites me to be part of an industry which makes the impossible possible, and reaches out to the hearts and minds of audiences from all walks of life

Jessica moved to Edinburgh from the Midlands in 2008, after gaining a coveted place on the Animator Apprenticeship Scheme run by what was then Scottish Screen. She proved herself to be a commited and passionate young animator, with the necessary patience and core skills required to make a career in the artform.

After her apprenticeship, Jessica lived and worked in Glasgow.  She made a name for herself as a freelance director and animator in the film and TV industries.

Jessica’s passion for directing comes from the ability to share stories, experiences and emotions through work on screen.  Her short film Fixing Luka is a stop motion animaton that explores her personal experience of growing up with a younger brother who has autism.  The film went on to win a New Talent BAFTA for Original Score and a Scottish BAFTA for Best Animation in 2011.

Also in 2011, Jessica was commissioned as a writer/director on B3 Media’s Talentlab Programme;  a creative development programme produced in partnership with Skillset and BBC Films.  She received mentor support from top industry professionals and on completion was accepted onto the prestigious MA in Animation at the Royal College of Art.

Studying for a masters degree provided a crucial tipping point for Jessica, taking her to the next level of her career.  She received a Dewar Award to enable her to benefit from this opportunity to the full.

It excites me to be part of an industry which makes the impossible possible, and reaches out to the hearts and minds of audiences from all walks of life 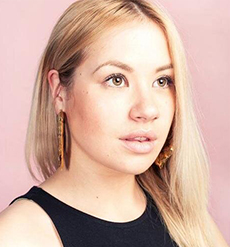 Gillian Park is a young screenwriter of exceptional talent and great promise.  She is a natural storyteller with a flair for comedy and a powerful, original voice.  Her work reflects her Scottish background with a warmth, vigour and authenticity, but she is equally able to push outside the confines of her own experience to explore different genres and areas of writing.

Born in Irvine, Gillian left school at 17 to do a HNC in TV Production at Glasgow Metropolitan College.  Whilst there she discovered a passion for writing, and after finishing her course she was accepted on a course of study at the RSAMD (now the RCS).  The short film she wrote and directed there was screened internationally at a number of festivals and went on to win several awards.  She graduated from her degree with first class honours.

After graduating, Gillian began working with a variety of production companies, but her dream was to study screenwriting at the National Film and Television School.  In 2012 she applied with a script set in Scotland and was successful, gaining an outstanding opportunity to hone her craft.  The fees and living costs in London proved challenging, however, and Gillian was awarded a Dewar Arts Award to support her in completing her MA and making the most of the opportunity she had strived for.

Gillian received a Dewar Arts Award to enable her to complete her masters degree at the National Film and Television School, London. 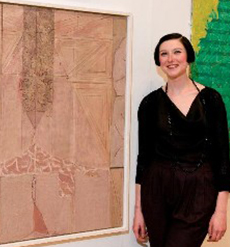 There has been a great deal of progression within my work. From my critical and contextual awareness of the concepts and underlying theories, to a greater engagement with materials; I have established a practice that is continually evolving.

In 2005, Heather Ross graduated from Gray’s School of Art as an outstanding painter with a first class honour degree.  Her talent was recognised by the school and she was offered the opportunity to lecture there part time.

Heather is curious and ambitious, and has won numerous distinctions, awards and scholarships to exhibit and travel. She is driven to pursue her passion, and in 2012 gained a place on a prestigious masters course at Chelsea College of Art.

Heather’s Dewar Award supported her in accepting her place to study at the Chelsea College of Art.

There has been a great deal of progression within my work. From my critical and contextual awareness of the concepts and underlying theories, to a greater engagement with materials; I have established a practice that is continually evolving.